On 5 and 6 December three members of the St James Maths Team attended and presented at the Maths Association Victoria (MAV) Conference. The conference was a two day event which hosts over 1 400 educators from around Australia.

As part of our presentation we showcased the deep learning and research based practices we have been undertaking through Box of Facts and Learning Framework in Number (LFIN). We demonstrated the ways Box of Facts and LFIN has positively impacted upon student learning in the whole class setting.

Not only was the MAV Conference a great opportunity to demonstrate the work we are doing but also was a great chance for each of us to learn new ideas from a variety of presenters. Becky (year3) and Bec (Foundation) commented that they had learnt a lot from the experience and are looking forward to implementing their new knowledge back in the learning community.

Overall, presenting at the MAV Conference was an exciting experience especially as we were able to boast about how fantastic it is to be a part of the St James community.

Also don’t forget to check out the Star Weekly to read all about the success of St James student Dulain competing in the Australian Maths Trust Competition.

We are excited to announce that the results are now in for both the APSMO Maths Olympiad and Maths Games. We had 24 Students from years 4, 5 and 6 take part in the competitions which went across five months. The Maths Olympiad and Maths Game events were highly competitive with children from all over Australia and New Zealand taking part in the competitions.

Congratulations to all of the competitors on their dedication and hard work!

We are excited to celebrate the achievement of the 63 Students who participated in the Australian Mathematics Competition.

Students in years 3-6 were invited to participate in the competition which took place throughout Australia and New Zealand.

Overall, as a school we achieved the following certificates:

A big congratulations to Dulain Withanage who achieved the Best in School award, as well as, winning a prize certificate for achieving a score in the top 0.3% in the Middle Primary Division.

Congratulations to all of the students who participated and we look forward to having even more participants next year. 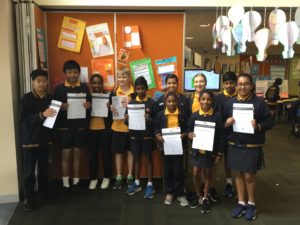 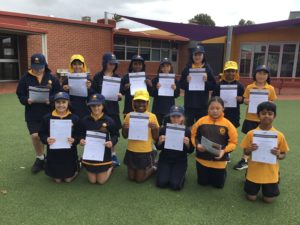 MATHS OF THE YEAR!

We had a BLAST at our Maths Party Night last Thursday! There were interactive real world based mathematics activities that saw over 100 families and close to 300 people in attendance.

The poster competition leading up to the night was a huge success as well. There were 60 entries from families displaying a variety of interpretations of our theme ‘Maths of the Year’.

The prizes from the night will be announced at this week’s assembly by the Maths Team.

Don’t forget to return your Maths Party Night feedback form to go into the draw for a family pass to Melbourne Museum!

We look forward to seeing even more families join in the fun in 2020. 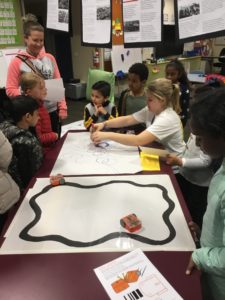 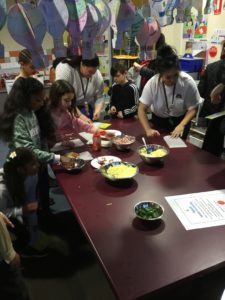 Don’t forget to create your poster! 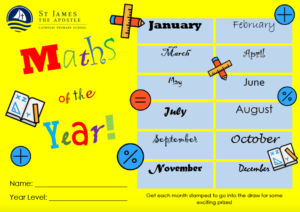 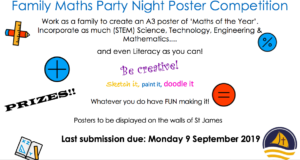 The children competed fiercely using a range of strategies and mathematics concepts to problem solve, whilst encouraging their team members.

The children from both groups participated to the best of their ability and had a lot of fun with children from other primary schools. Some of the activities included maths races, maths board games, group problem solving tasks and many more.

We wish the year five and six children best of luck for their upcoming MAV Games Day at Lumen Christi in September. 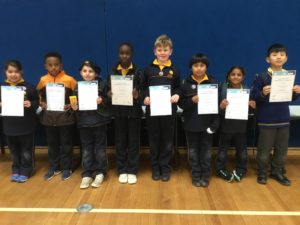 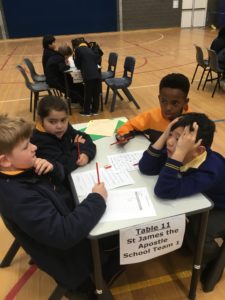 Students have been eagerly lining up at the library door to get their memberships stamped each week. To recognise the students excitement, commitment and participation each child who brought in their stamped membership was awarded with an ‘I love Maths Club’ badge. 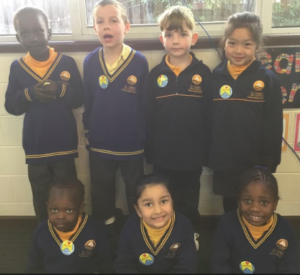 Maths Club will continue to run in the library during Tuesday lunchtimes in term 3. 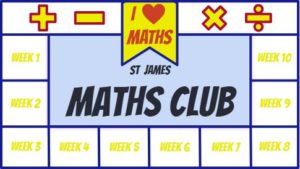 The St James children will work independently to race against the clock to solve five worded problems within the allocated 30 minutes.

We wish these children well in each of the five competitions! 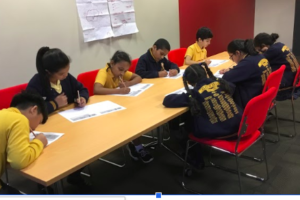 We are pleased to announce that Maths Club at St James is open for business! We have had a perfect start with 200+ students attending the club in the first two weeks.

Students have been eagerly lining up at the library door to get their memberships signed to take part in a variety of games such as Snakes and Ladders, Race to 100, 30 Minute Challenge and much much more. 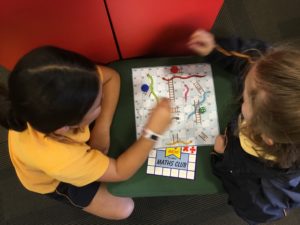 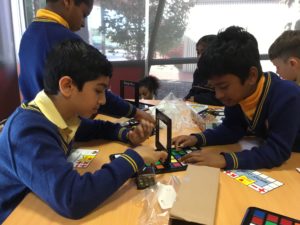 All students will be welcomed to take part in the activities which take place in the library during Tuesday lunchtimes.

Don’t forget everyone who attends will be rewarded with their very own Maths Club Membership.

We are pleased to announce the opening of the first official Maths Club at St James. We have a rich history of mathematics at St James and are looking to extend the excitement and engagement through our very own Maths Club.

All students will be welcomed to take part in a variety of maths activities which will take place in the library during Tuesday lunchtimes throughout term two.

Everyone who attends will be rewarded with their very own Maths Club Membership.

Mathematics is all the rage at St James!

Across all year levels, student data is being analysed to choose skills and concepts each child needs more work on in the area of place value.

In Year 2, the children are learning how to use place value houses to read and make numbers with bundling sticks. They then worked to write numbers in their expanded form as part of the Year 2 place value unit. 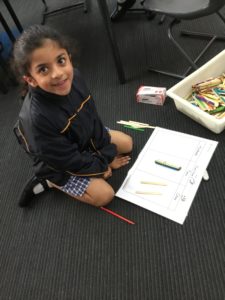 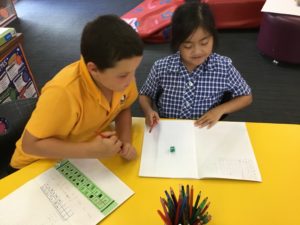 In Year 6, Miss Cini is taking a focus group to help read, compare and place decimals on a number line. Kayllen suggested that you look at each of the place value holders before deciding on which decimal is larger. 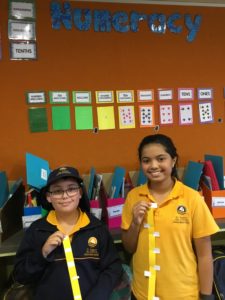 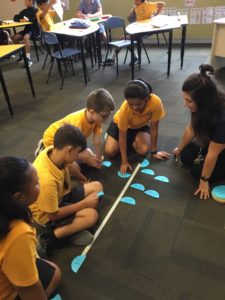 In Year 1, Khanh, Luca and their friends are looking at the different combinations to make ten with the use of tens frames. 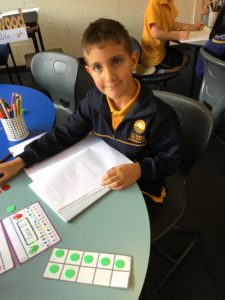 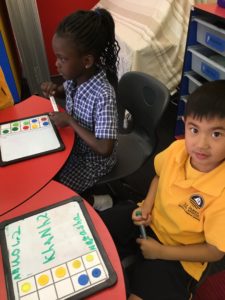 Ask your child what Mathematics they have been a part of!