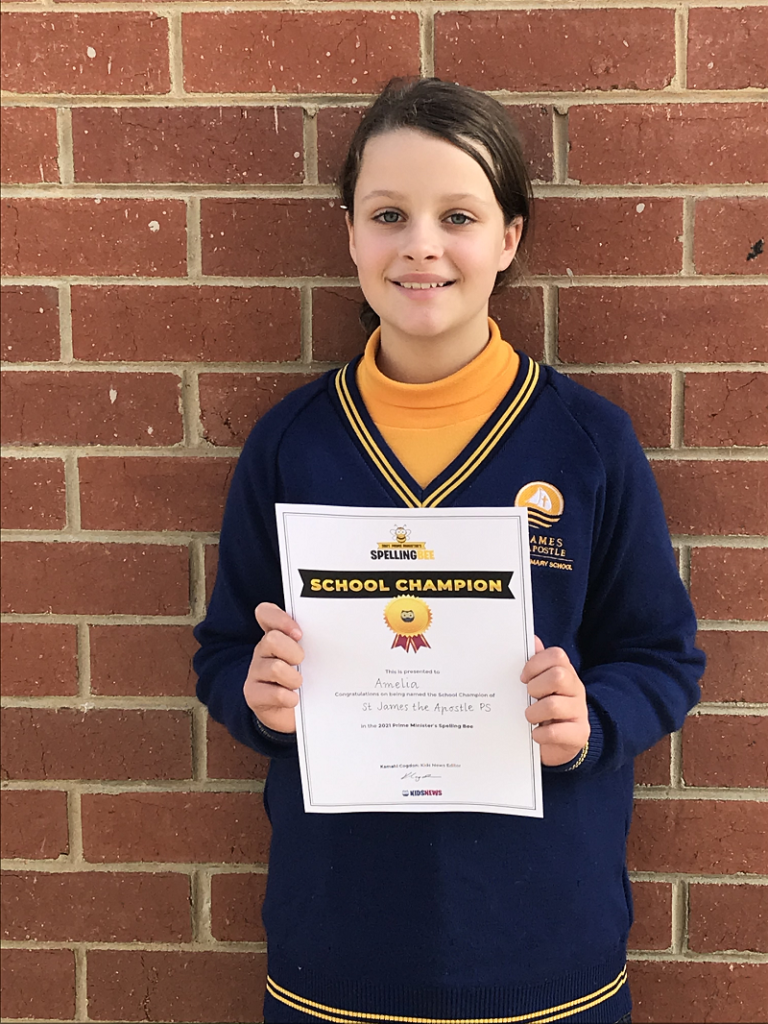 This year 21 learners from Years 3 – 6 took up the option to participate in the Prime Minister’s Spelling Bee. Last term the learners sat the online test to compete in the school round. Despite the best efforts of all our fantastic spellers, none of our learners will be moving onto the State Championship stage of the Spelling Bee.

We congratulate all the learners who participated:

Out of all these learners we were able to name our school champion – congratulations to Amelia in Year 4 who scored highest of all learners.

How to help with spelling

Parents often want to know how they can help their children with spelling.

For beginning or emergent spellers, these strategies may be helpful.

Practice Phonemic Awareness (hearing individual sounds in words) and letter sounds. Let your child hear what it sounds like to break words up into their individual sounds. Show them what happens when you change a sound. For example, say the sounds in pig separately (p-i-g), then say the word. Then say the sounds in big (b-i-g) and say the word. Put it on paper so they can see the change. Talk about which sounds are different and which sounds are the same. Have your child practice breaking words apart and blending them together.

Allow Beginners to Spell Phonetically. When first learning to spell, allow children to spell words exactly as they hear them. Teach them to say each sound in a word and write down the letter or letters that represent each sound, until they have spelled the word. For example, they might spell lemon as l-e-m-i-n. Then review the word with them and talk about which letters they can change to make the word correct (help them figure out the correct replacement letters if needed). You can practice this several times with different words. Let them rewrite the word the correct way and compare the changes. For children who have trouble writing, allow them to use magnetic letters to create the word, such as the ones below, or allow them to type on the computer if they are able to do so.

Teach Children to Notice Chunks in Words. Chunks are more than one letter together that normally make the same sound (e.g., ch, sh, br, ple, all, ate, at). Have your child practice writing several words that use the same chunks to establish a sense of word families (groups of words that have a common feature or pattern).

Practice Rhyming Words. Teach children about rhyming words and provide them with several examples. After teaching them how to rhyme, give them a word and ask them to come up with rhyming words. Once they have the hang of it, encourage them to tell you a word and list several words that rhyme with it. Encourage them to write rhyming words down as well. Allow them to start with a common word pattern such as “all.” Show them how adding a letter in front of “all” and changing that letter produces a list of several rhyming words (e.g., e.g. all, ball, call, fall, hall, mall, tall, wall).

Use Spelling Rules (also known as rule-based strategies). Some common spelling rules are:

These are only some of the rules in spelling. You can do a Google Search for common spelling rules to learn more.
Please remember there are always exceptions to spelling rules, meaning that these rules will not apply to every word in the English language.

Teach Children to Edit Their Work and Use Repetition. Encourage children to review their work carefully and rewrite a word five to ten times when they find a misspelling (ten times is recommended but this may be too much for some children). It is much easier to notice spelling errors when rereading work, than to notice them the first time around when the mistake is made. Many times spelling errors get ingrained in one’s memory after repeating the same mistake several times. Writing the word several times in a row helps to retrain the child’s memory. You can try to make repetition more fun by turning it into a game. To do this, take turns with the child. (e.g., have him write the first word 10 times while you watch, then you write the next word 10 times while he watches – or any other turn-taking variation).

Show How Different Sounds Can Be Represented in Different Ways. For example, the /k/ sound can be represented with a c as in cat, a k as in kangaroo, a ck as in kick, or a ch as in school.

Allow children to practice spelling words in a way where they can easily make corrections, replace one letter for another, or fill in missing letters.

Read with your child and encourage your child to read as much as possible. When you come across a word with a certain pattern or rule, you can point out the word to your child/students and reiterate the rule.

For example, if you see the word vacation you can remind your child that many words that end with a “shin” sound are spelled with the suffix “tion” such as creation, medication, or fiction.
If you see the word “cat” you can remind your child that several three-letter words end with “at” such as bat, hat, and, mat. Teach your child to try to pay attention to these types of patterns when reading.
Remember to always stay calm when working with a child or student, even if you think they should be getting something that they are not getting. If you get frustrated with them, they may start to feel anxious, angry, inferior, stupid, etc. which will lead to a less productive learning session.
Keep practice sessions short (5 to 10 minutes for younger children or children who get easily frustrated and 10 to 15 minutes for older children or children who can work for longer periods without frustration), unless the child is eager to keep going.

It would really make my day if you could comment below after trying some of these strategies with a child or student. I would love to hear if you enjoyed doing the activity together and what you found most helpful.

Supporting your child to read at home

The importance of reading cannot be underestimated and at St James we are now well in the swing of learning about the reading process. Your child will be coming home with take home books or library books that can be used to practice reading and for enjoyment. Take home reading involves the opportunity to listen to your child read and provides your child practice reading aloud fluently. The take home texts should not be laboured over – the task of reading should not become a burden and whether the text is challenging, easy or somewhere in between, there are different strategies families can use to help this process flow better. Just remember that take home books only form one part of your child’s reading diet. They will experience reading and viewing in many different ways and forms.

Reading with children is one of the most enjoyable things a parent, grandparent or carer can do, and as a bonus it helps their language development.

While it is not the case that children learn to read simply by being read to, shared reading or reading with children is one of the essential literacy experiences that contribute to children becoming good and willing readers. Books contain words, grammar and language structures that are different to conversational language.

Shared reading activities are largely about nurturing a love of reading and books but there are some things that will make the experience especially beneficial for children. One of the keys is to read with your child, rather than to your child, no matter their age. It needn’t stop when children are able to read independently. The key is to involve children in the reading experience by letting them choose books, discussing the story and the characters, talking about the sounds and meanings of the words, and talking about the pictures.

Some of the benefits include:

Take home reading books make up only one part of your child’s reading diet.

If you have any questions about take home reading and your child, please take the opportunity to chat with your child’s teacher.